A week ago Sunday, the autumnal equinox ushered in a new season.  In my humble (or not so humble) opinion, autumn is the best season.  The air is crisp, clear, and glorious, the days are a bit shorter, and nature takes a rest but shows off before winter settles on the land.  Although there are at least four hummingbirds (down from an apex of 360 in early August) still imbibing on sugar water and blossoms around our place, we know they will soon head for parts south.

Fred and I took a trip across the pass on Highway 64 between Tres Piedras and Tierra Amarilla this weekend, and the aspen have not really started turning gold yet, but I suspect the real show may be in a week or so, presented by the scrub oaks.  There was a dusting of snow at the higher elevations, and as always, we wished we could bottle the rare mountain air.

Autumn is also harvest and art time in New Mexico, with numerous festivals and shows.  The Taos Fall Arts Festival opened Friday night at the Convention Center in Taos.  I had one piece in Taos Select, as well as a miniature, and two photographs are hanging in the Taos Open side.  Now that the exhibit is officially hung, I can publish these in my blog.


Since the Taos Open side is not juried, I entered the Ranchos Church in winter image, as well as the Brugge walkway. 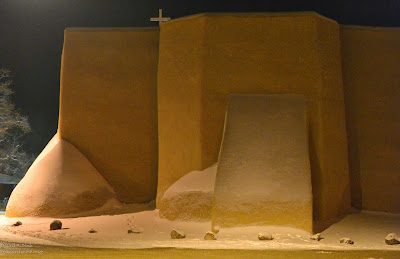 After all the incantations, prayers, rain dances, and other forms of offerings that were made in the Southwest for rain to replenish the water table, it came this week, in some places with a vengeance.  Although New Mexico did not receive the national press nor suffer the magnitude of damage that Colorado did, many areas nonetheless received impressive amounts of rain.  According to the Albuquerque Journal, Bandelier National Monument received 9.35 inches since Tuesday, and nearby Los Alamos had 7.22.  With a storm total of 3.16 inches, Albuquerque received almost half of its yearly moisture.  There is a huge sinkhole in the Interstate 40 median 20 miles west of Albuquerque,  a Phoenix man died when his vehicle was washed away near Elephant Butte, and the Rail Runner commuter train line was closed on Sunday due to a washed out bridge on Santo Domingo Pueblo land.

On our patch of the mesa, we received 3.42 inches as a storm total, and for the most part, the rain was quite civilized, without lightning or hail.  There were some impressive skies which offered the name of today's blog.

Here is "before" - a cumulus cloud formation, packed with moisture, lifting and building layer upon layer. 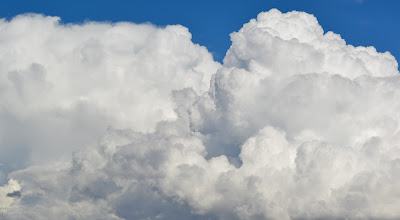 And just so that I can remember puddles when dryness returns to the land, here is my "after" shot of  rice grass sitting in a puddle that formed after one solid rain. 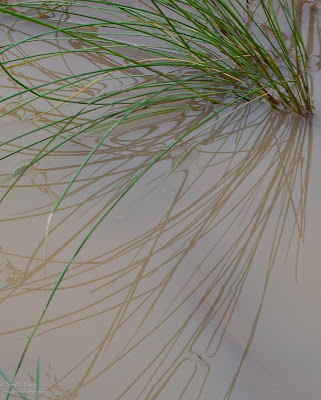 I have always loved the structure and curves of both art nouveau and art deco, as well as the broad category of illustration.  After meeting Braldt Brald and pondering the work on his website -www.braldtbraldsstudio.com - the genres were refreshed for me.  There is nothing like the pure design of Charles Rennie Mackintosh, Gustav Klimt, Alphonse Mucha,and Maxfield Parrish.  "Arts and crafts" and "prairie" design drifted in and out of the nouveau and deco movements, while incorporating Asian influences.  Frank Lloyd Wright and brothers Charles Sumner Greene and Henry Mather Greene  furthered these elements in what has become known as American Arts and Crafts architecture.

This week's blog offers a challenge.  To me, elements of art nouveau and art deco are found in these photographs.  What are you seeing here?

Let me know where these take you!  For full effect, click on the images.

Although it has neither been seen nor photographed by as many people or in as many ways as the Grand Canyon, the Rio Grande and its gorge is northern New Mexico's jewel.   The massive volcanic area through which the river carved and altered the landscape, some 242,5000 acres, was named a National Monument this March.  From south to north, there are multiple approaches and ways to view it.  Two overlooks along Highway 68 north from Espanola to Taos are stunning, but the second of these provides almost a roller coaster effect of rising and then sinking slightly, revealing the Gorge in a truly stunning way.  It literally takes your breath away, if just for a moment. 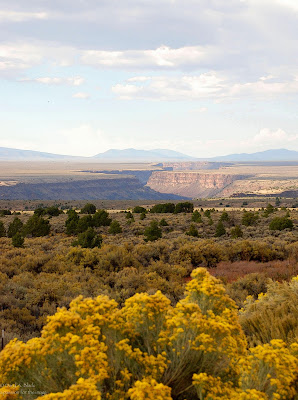 North of the Gorge Bridge, there are a number of overlooks and camp sites which offer totally different visions of the area. 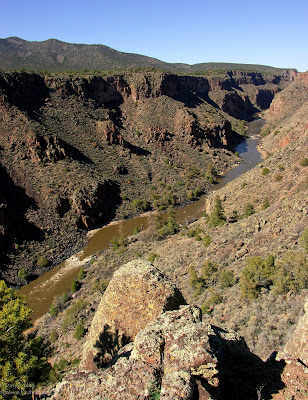 However you choose to view El Rio, I highly recommend this time of year.  It is a bit cooler, and the light is perfect for photographing the Gorge and the bridge as well.