Memorial Day was established after the American Civil War, and originally honored only Union soldiers, but it eventually was extended to all fallen soldiers.  I am pleased that more attention is being given to these soldiers and their families.

What I had neither read nor heard about until yesterday, due to the general "east of the Mississippi" news slant, is that this is also the 75th anniversary of the opening of the Golden Gate Bridge spanning the "Golden Gate"- the entry to San Francisco Bay from the Pacific Ocean.  Ansel Adams took many photographs of the Golden Gate before bridge construction began in 1933, during construction, and after the icon was complete.  My guess would be that billions of photographs have featured the "international orange" mass of steel, which continues to be awe-inspiring and photogenic.

Although I have photographed the bridge a number of times from different angles, and at different times of day and year, it is always a thrilling experience of which I never tire.

This series of photographs were made with Fujichrome Velvia positive film and scanned. The first image is of the bridge wearing its fog and patriotic garb, shot from Fort Point. 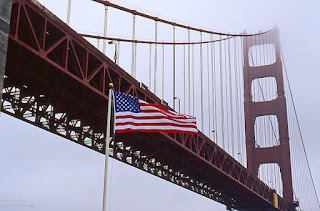 In the 1950s, banks and other financial institutions published books on local scenery and culture.  With luck through my husband's family, I have a copy of a comb-bound, 11" x 14" 1954 publication from the American Trust Company of San Francisco titled The Pageant of History in Northern California by Ansel Adams with text by Nancy Newhall.   It features black and white photographs of the state - everything from the Golden Gate Bridge to vineyards, oaks, factories, and churches- and is one of the reasons why photography is important.  The image captures a moment in time that will never be duplicated.

...come the most beautiful things.  My assignment this week was to sit or lay flat on the ground without encountering a rattlesnake or being stung by any number of creatures living in the sagebrush, to photograph the paintbrush.  Due to a late and very wet snowfall, these members of the figwort family (genus Castilleja) are appearing in abundance out of the chaos of sagebrush skeletons and still-dormant grasses, as if a painter carrying a bucket of red paint tripped and caught himself just in the nick.

I think of paintbrush as being a very deep red, but in actuality, most of the species here are a red orange. Occasionally, I will see one that is almost a blue red in its depth, but those are unusual, and are most common in the high mountain terrain. 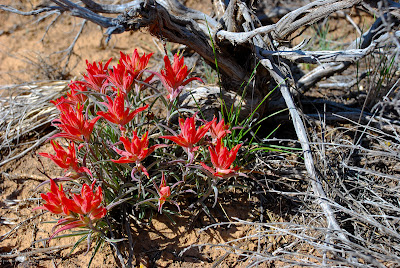 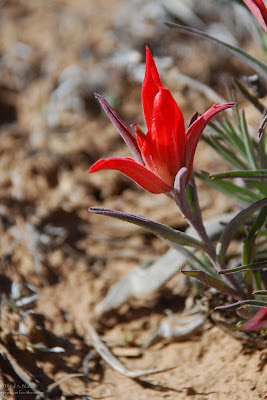 As chaos theorists know, some of the most fascinating things emerge from the stew that is life.

Most of you know that I published a book in 2002 titled A Place Like No Other:  people of an enchanted land (Sunstone Press, Santa Fe).

I am about to embark on another environmental portraiture project, and I did a shoot on Wednesday that, in an odd way, might be considered environmental portraiture.  The subject this time was chickens (and a rooster named Big Daddy).  The place - Casa Gallina - a wonderful set of holiday rental properties in Taos.  This is not a bed and breakfast inn, but guests can have as many eggs from owner Richard Spera's chickens as they can eat.  You cannot find fresher eggs than those found in the nests.  Richard encourages his guests to visit with the chickens and reconnect with how real food is produced.  The chickens and rooster Big Daddy have an incredible vocabulary and I had a great time on the grass, following them around, and trying to make their "portraits".  Strange, yes, but the patina, patterns, and colors of the feathers are quite incredible. 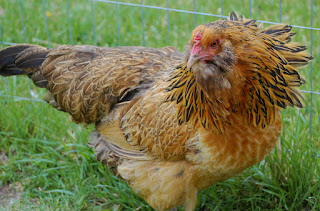 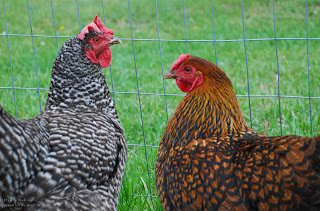 Try to put these puzzles together! 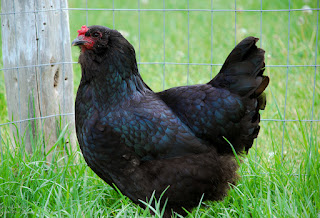 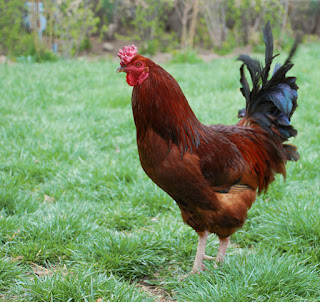 Big Daddy in all his finery

until next Monday (and the rooster crows)

Humans probably began painting walls as soon as their need for food and survival had been met.  The need to create and paint is in our DNA, and that need is perhaps even more apparent today.

Here are two wonderful pieces at Warehouse 21 in Santa Fe. 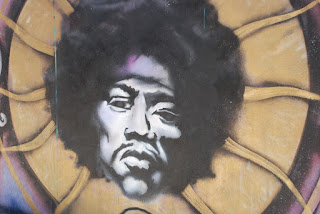 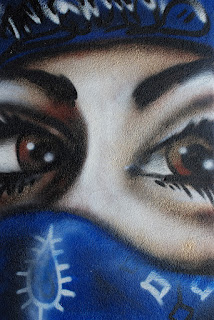 I have always admired muralists and their work, whether the medium is mosaic, some sort of applied paper or fabric, or spray paint. I wanted to quickly create my own, and here is an immediate result using a camera.  It is a reflection created by the glass garage doors of the Farmers' Market and the building across the railroad tracks from it at the Rail Yard in Santa Fe. 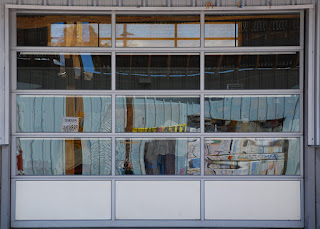 My thanks to all who make the world a more beautiful place.