The title of Charles Dickens' novel that was published in serial form between 1860 and1861 applies aptly to so many things today for which we wait - rain, civility, sanity, and real communication in our government, world peace.  Everyone has great expectations.

The egg is a metaphor for expectations.  Its beautiful shape and relative fragility hardly belie its potential.  You have seen eggs in this blog before but I wanted to present an image here that will be on exhibit in a four-woman show "Intersection" beginning 13 July and running through 10 August at La Tienda Exhibit space in Eldorado, south of Santa Fe. 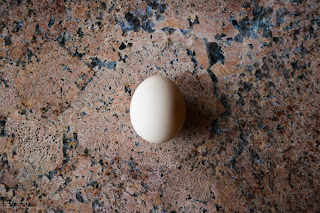 Here is another representation of the egg reflecting itself. 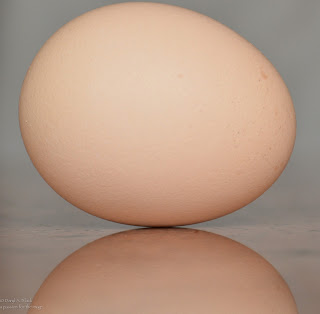 I would be honored if you could join us at the opening from 5 p.m. - 8 p.m. on 13 July, from 5 p.m. - 7 p.m., on 20 July (music provided by one of the artists, Caroline Jenney) or stop by Wednesday - Saturday between the hours of 11 a.m. and 6 p.m.  In addition to my photography in its wild and varied glory, oils by Fran Nicholson and Kathy Olshefsky, and gelatin monotype collages by Caroline Jenney will be on display.

With great expectations and...

The blog title for today's piece was not meant to oxymoronic, as some might think.  I don't know the origin of the expression "bird brain" but it certainly does NOT apply to the Corvid family.  This intrepid bird family includes ravens, crows, jays, and magpies, and every last bird in the group is brilliant.  Since it is fledging time, we are seeing some outrageous behavior from the latest ravens to leave the nest as they become part of the outside world.

Like most birds that survive the fledging process, new ravens look almost exactly like their adult counterparts with exception of shorter tail feathers.  I like to call them teenagers because there are definite similarities to human teenagers.  Seriously.  Several summers ago, we saw two ravens playing soccer with a rock.  There were lots of rocks around but they were passing the same rock back and forth to one another, not missing a beat.  And like human teenagers, ravens are starving - constantly - and do not hesitate to make the fact known to parents who are keeping watchful eyes on their young.  They are insatiable!  And because they have a real sense of play and curiosity and have not yet learned to be completely leery, they are easier to photograph.

I mentioned their shorter tail feathers.  But the feathers on their heads sometimes give that just shaven, "buzz cut" look.  Check out the punk do on this raven. 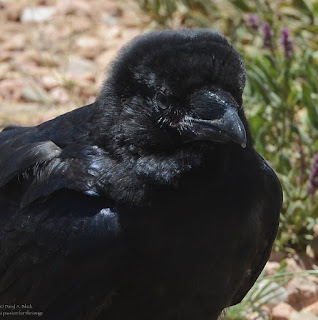 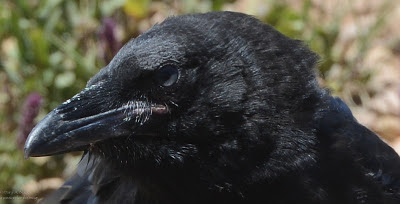 By now, you know I cannot resist details, and ravens' feathers are some of the most beautiful.  The color almost becomes an iridescent blue. 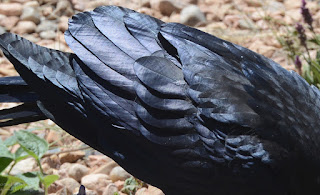 And finally, what a wild, abstract image they make.  There are endless layers of rhythm and design here. 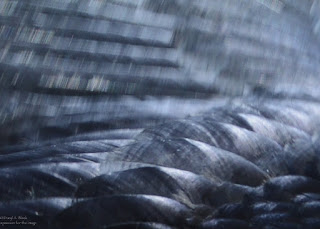 A May wedding in the high country

As promised last week, today's blog includes more photographs from the wedding I shot near Alpine, Arizona at Hannagan Meadow Lodge.  I had not been to this particular area of Arizona before, but had searched the internet for photographs and information about the lodge.  That way, I was armed with some facts before arriving on the scene.

At 9,100 feet elevation in the White Mountains of Arizona, Hannagan's is base camp for people from all over the Southwest who fish, hike, horseback ride, and snowmobile. The wedding I was honored to photograph was actually the first the Hannagan's staff had done.  Chairs were set up in front of a wooden platform or deck in an open grassy area between tall conifer trees.  The platform provided level ground for the ceremony itself.  Its proximity between the main building from which the groom and grooms men, parents, and grandparents were arriving, and another set of cabins from which the bride, her father, and bridesmaids were arriving, made it ideal.

As everyone who has ever tried to photograph anything at high elevation knows, the light can be stunning or it can be very unkind.  In tall trees, what I call "hatchet lighting" abounds - blindingly bright light combined with dark shadows.  It can make exposure a challenge.  A lens hood is invaluable and a photographer's best friend in situations such as this, and I was giddy to have one for my 70-200 mm lens.  The wedding took place at 3 p.m.  I had watched what the sun did the previous afternoon and had a basic plan for getting the best shots of the ceremony.  Here are a few of the results.

As you can see, the groom is partially in shadow, and the sun is directly on the bride's dress.  The lens hood kept the western light from hitting the lens directly, giving a softer look. 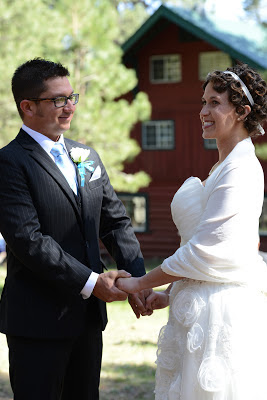 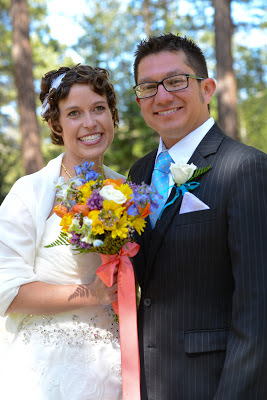 Although in both images, the western exposure amps up the whiteness of the bride's dress, the faces are in a soft complete shadow - almost the perfect light for a portrait.  Then, there are those winning smiles...

Compare that to the full, literally "in your face" light of the open meadow.  These shots were made almost two hours later than the others during the ceremony.  Very different but wonderful. 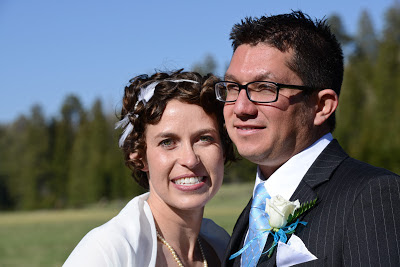 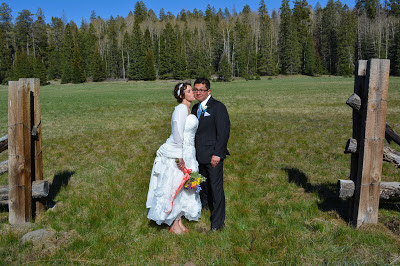 Thanks, Cathy and Javier!

Many photographers have expressed their disdain for photographing weddings.  The reasons are numerous and varied, but there are givens in the field.  The photographer needs to truly enjoy the company of human beings, and capturing their images.  He or she needs to be organized, have good communication skills, both verbal and written, and a wedding photographer must be brave.  I love photographing weddings, and even with my own failings, I still quaver with apprehension and uneasiness before the events.  I have dreams of being late, not being able to find the location, or worse still, not packing equipment or having multiple camera failures.  Years ago in Santa Fe, I drove by a church on a Monday morning and stopped to see what was going on.  It was a reshoot for a wedding that had happened over the weekend and the photographer had experienced equipment failure.  That is the ultimate nightmare for a wedding photographer.  But, despite all of these possibilities, once I get involved in a wedding, I love every minute.  And I particularly love the little surprises that occur and by dumb luck, I managed to capture.

The next couple of blogs will feature the wedding I recently photographed near Alpine, Arizona, at Hannagan Meadow Lodge.  Here are a few of the wonderful surprises.  In the first, I was shooting images of the wedding preparation and stumbled on this scene of the bride's sisters putting on eye makeup, in mirror image fashion. 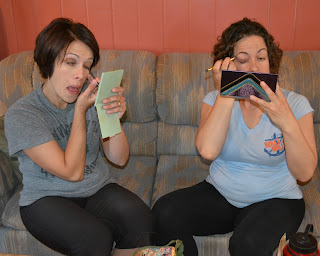 No, this is not Johnny Depp, but the best man 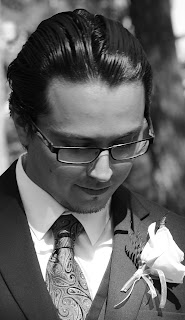 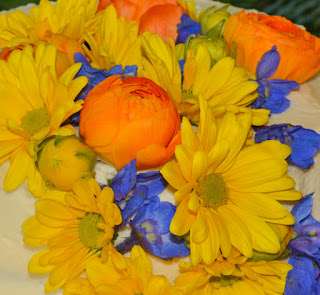 A place is beguiling when it keeps popping up a person's mind at the oddest times and places.  Thus, El Malpais, otra vez.  Today's blog features more sandstone knobs, hoodoos, and arches in the making.  It is amazing how trees manage to plant themselves in such harsh but also opportune places. 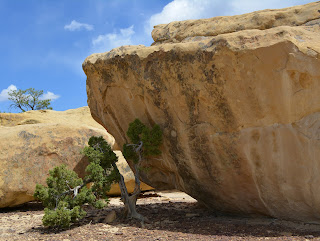 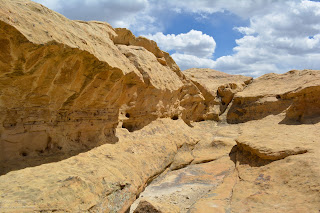 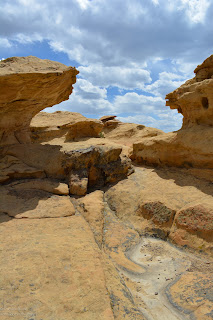 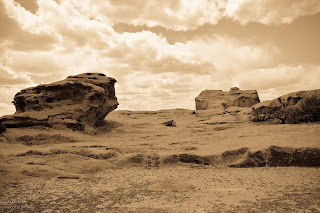 In case you plan a trip here in the near future, the visitors' center is a wonderful source of information, as are the websites of both the National Park Service and the Bureau of Land Management.