Spring has taken its sweet time revealing itself in many parts of the world this year.  But for weeks now, the Cassin's finches have been speed dating in the grove near our home, and more hummingbirds and summer residents arrive each day.  We also had a most unusual sighting this week.  Short bursts of flight told us that our eyes weren't deceiving us.  In the land of little rain, there was a cormorant flying overhead.

All of these things shout "Spring!"  But nothing says it quite like flowers.  They speak for themselves.

until next Monday,
DB
a passion for the image
Posted by Daryl A. Black at Saturday, April 23, 2011 No comments:

During the last few blogs, I have shared photographs of some of the incredible people I was lucky enough to photograph for my book, A Place Like No Other:  people of an enchanted land.  The book actually began as a semester project for a photography class I was taking and during that time, it gained a life of its own.  I began by photographing the husband of a friend of mine.  And with every opportunity I had, I asked friends and journalists who they thought I should photograph.  Before much time elapsed, I had a list with hundreds of names on it.

Although he came as a recommendation and was not someone I had known before, one of the more memorable photo shoots of the bunch was with Archie West - cowboy, rancher, actor, Renaissance man.    Because he had been in some movies (Cheyenne Social Club for one, and Jack Schaeffer's character Monte Walsh is based on Archie), he was completely comfortable with the camera.  Because he was on and off horses all the time, he knew how to move.  He was patient with my photographic style which can be fairly methodical and at the same time active.  He was the perfect model.

My first visit was an introduction.  The second visit, musicians Jeanie McLerie and Ken Keppeler who call themselves Bayou Seco, were at the ranch making their music.  I got to photograph them as well, with Archie providing additional accompaniment.  He offered lunch of local tamales which we washed down with tequila! 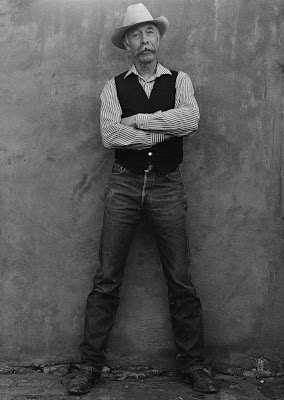 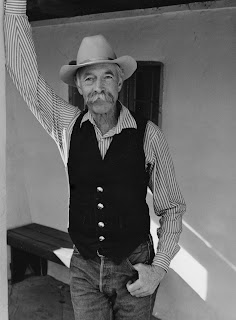 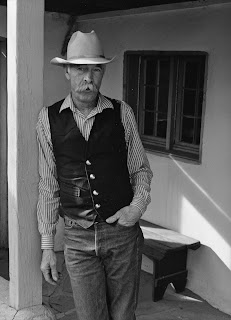 Can you see how difficult it was for me to choose among the sixty or more shots I had of Archie?   Each one said something different.  Below is the image that I finally selected for the book.  Part of the reason was his hands on the saddle.  The other images showed his incredible face but the shot below demonstrated a huge part of him.  Those hands of his are strong and full of life.  They had to be part of the book. 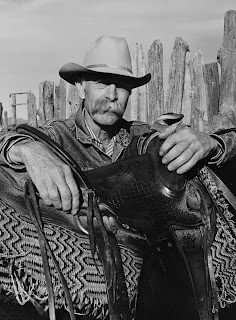 According to a 2009 article in Western Horseman magazine, Archie West is still running cattle on his ranch south of Santa Fe.  He is 74 years old.

After viewing a CGI (computer generated imagery) extravaganza at a local movie theatre last week, a friend said "You really can't trust a photograph to be real any longer, can you?"  His words not only related to the movie but to a friend of his who had altered a photograph of whales. PhotoShop has made it possible to change photographs in a wide variety of ways.  Many professionals would say that these computer programs are just tools, along with digital cameras, to take photography to a new level.  Purists shoot film and develop in the darkroom where they can crop, filter, burn, dodge, spot, solarize, and tone photographs, and change the feel of them using different developers, papers, and exposure times.  The process of adding or subtracting elements is also possible in the darkroom but it is quite a bit more difficult and time consuming than using PhotoShop.  Most people have not spent time in a darkroom, but many have access to PhotoShop or other programs, so changes are now much more widespread.

My philosophy leans toward the purists, despite the fact that I primarily use digital technology, and I hope that photojournalists, particularly, have retained their ethics about photo alteration.  It is difficult enough to differentiate between reality and spin these days in the "news", and images are aired so quickly and repeatedly that their influence is profound.  It is, indeed, a question that will be pondered for aeons, just a literary and other artistic license have always been discussed.

All of this leads me to the photographs below.  I photographed Victoria in September, 1997, for my book A Place Like No Other:  people of a enchanted land, near the Aspen Vista trail above Santa Fe.  She had her two great danes with her, a breeze was blowing, and neither of us wanted to attract too much attention. Thus, as you can see below, there are pieces of grass in the photograph that, to me, are distracting.  Would you remove them or leave them as part of reality? 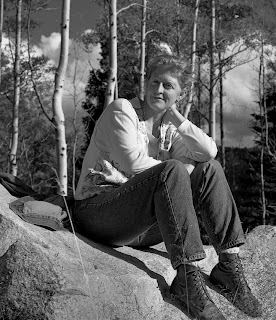 In the photograph below, would you be tempted to crop or change the position of her left leg to reduce the emphasis of her knee? 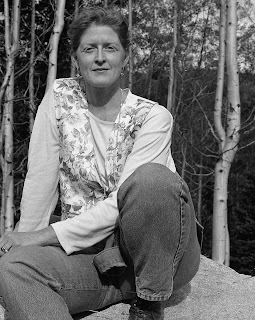 These are the sorts of things I ponder every time I photograph and load images into the computer.  Just a little something to chew on during these blustery, spring days.
until next Monday,
DB
a passion for the image
Posted by Daryl A. Black at Monday, April 11, 2011 1 comment:

a voice from the not too distant past

From 1995 until 2002, I traveled New Mexico's highways - single lane and interstates alike - stopping along the way to photograph people in the state for a book that would become A Place Like No Other:  people of an enchanted land.  One of the people I photographed is Conroy Chino.  You may know him from his work at several Albuquerque television stations, as New Mexico Secretary of Labor, and/or for his work with the state legislature.  The photo shoot I had with him at Acoma Pueblo was a joy.  He also wrote a perspective on Acoma for the book, which made it that much richer.

Two weeks ago, I received an email from him and it reminded me of that shoot.  In the next few blogs, I will share photographs of some of the amazing people with whom I had the honor of working for that book.  These will not necessarily be the images that were used in the book because I generally shot two to three rolls of Ilford 400 220 film of each person.  That made the selection process difficult in almost all cases.  Below are three shots of Conroy. 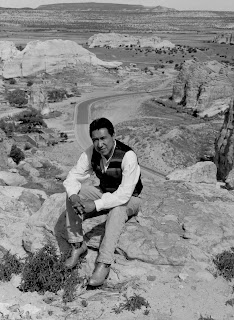 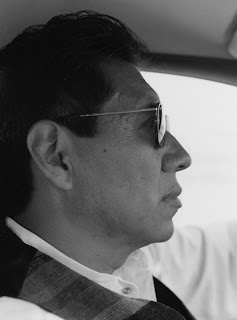 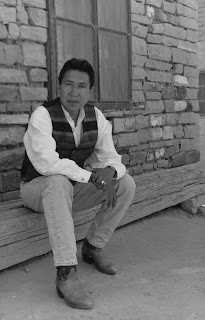 Don't blow away in the April winds while you photograph the world.
until next Monday,
DB
a passion for the image
Posted by Daryl A. Black at Sunday, April 03, 2011 No comments: