...photographers, collectors, historians and writers.  This week, the work is not mine, but that of many who came before today's photographers and photo documentarians contained in a newly released beautiful book titled Lens on the Texas Frontier by Lawrence T. Jones III.  Published by Texas A&M University Press, this volume features historical photographs extensively researched, and blends them in context with enough background and scholarly information to provide a wonderful read.  It reiterates how complicated and tenuous photography was in the 19th century for the intrepid photographers who came to Texas and set up shops, or did itinerant work, traveling from farms to small towns and cities making daguerreotypes, then ambrotypes and tintypes before film came to make the art much less precarious and more extensive.  As it was, the number of photographers drifting from town to town or establishing studios was impressive.  I cannot imagine hauling a wagon full of silver-coated copper, tin, lead, or glass plates, and trying to keep them clean and out of the light before exposure.  These early artists had to be tenacious.  This tenacity coupled with ample passion for historic photography was also given to the collection process by Larry Jones over a 30+ year period.


The book is divided into sections - first documenting Texas history and early Texas photography from 1843-1900 - followed by photographs in the collection now housed at the DeGolyer Library at Southern Methodist University.  A chronology that begins with Cased Images including daguerreotypes, ambrotypes, and tintypes proceeds into Cartes de Visite, stereographs, cabinet cards, and large format photographs providing insight into frontier life as it was across the state.

Preceeding the list of formerly unlisted photographers (those not included in three previous sources  featuring Texas photographers), and the appendix of Carte de Visite photographic imprints (the photographers identifying marks or trademarks on the reverse of the cards, some of which were quite elaborate), there is a wonderful chapter titled "On Collectors and Collecting."

"As one becomes more experienced as a collector, one should keep in mind that there always will be something fresh and new coming in your direction.  How many times have I heard another collector make the statement 'There is no end to it?'  Yet, truer words were never spoken when it comes to collecting antiquities of any kind, including vintage photography.

It would be a terrible mistake for a fledgling collector to look at this book and think that all of the great vintage Texas photographs have been collected.  Nothing could be further from the truth.  Real Texas photographic treasures remain to be found, and the best of them come directly from families whose members still possess the precious daguerreotypes and ambrotypes of their ancestors."

Thanks to Larry and Lens on the Frontier, I now know that my husband and I are in possession of a great number of Carte de Visite family photographs.  My hope is that with the publication of this book and research done through the collection at the DeGolyer Libary, some of the photographs (the subjects and photographers of which are not identified) will now be identified by a new generation of family members or collectors and historians.

From time to time, "progress" requires change in the technical parts of a home or business.  I recall great (and sometimes justified) trauma while working for the state and city when computers systems or software changed.  There have been massive improvements made, but change stirs that limbo feeling in most, leaving one just a bit unsettled until normalcy returns. Thus, this email will be quick and dirty while a technician changes and updates our internet service, another part of spring cleaning.  The phoebes, broad-tailed and black chinned hummingbirds, and the blue birds will really feel it as we poke around in their nesting areas.

So here's to all the men and women out in the field who enable us to use some of the wonderful technology available these days!  Below is a photograph I took while capturing many of the individuals who built the Farmington Public Library between roughly 2003 and 2005.  Fred Cessna has an amazing face!  For the majority of the project, I used a Mamiya 1 3/4 x 2 1/4 format camera loaded with Ilford 400 HP5 Plus black and white film.  This image was scanned from a print I made on Ilford paper. 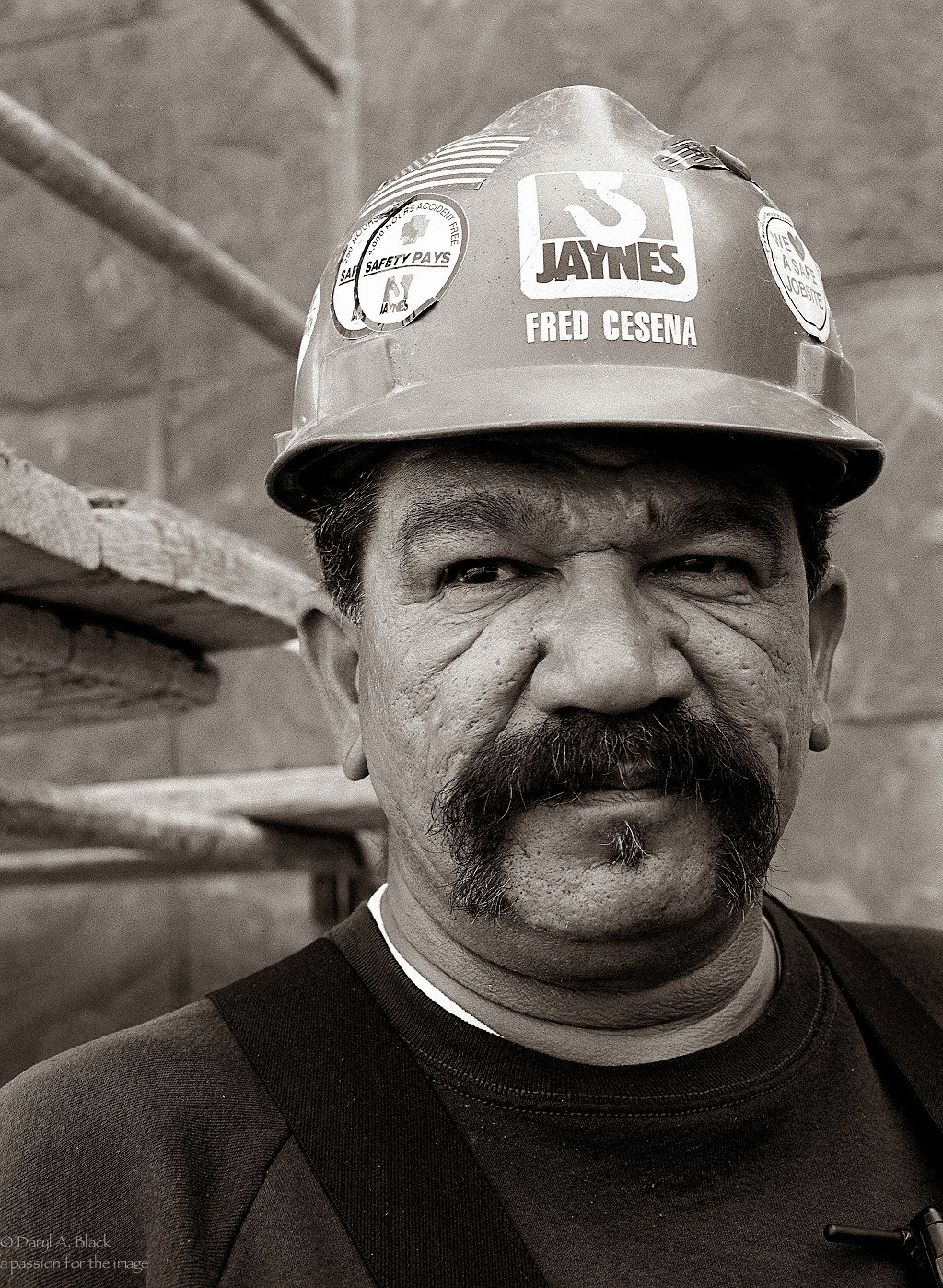 Also this week, I want to mention a wonderful workshop that will be offered in Taos by an incredible artist of many media, Gail Goodwin.  Check the Great Stuff This Week sidebar for information.

Passover, Easter, spring, birthdays, snow, births, passings.  All things that we humans celebrate.  Nature opens and gives us gifts with which to commemorate, such as these narcissus.

In the first photograph, snow is apparent in the lower right hand corner, a welcome sight on the dry mesa. 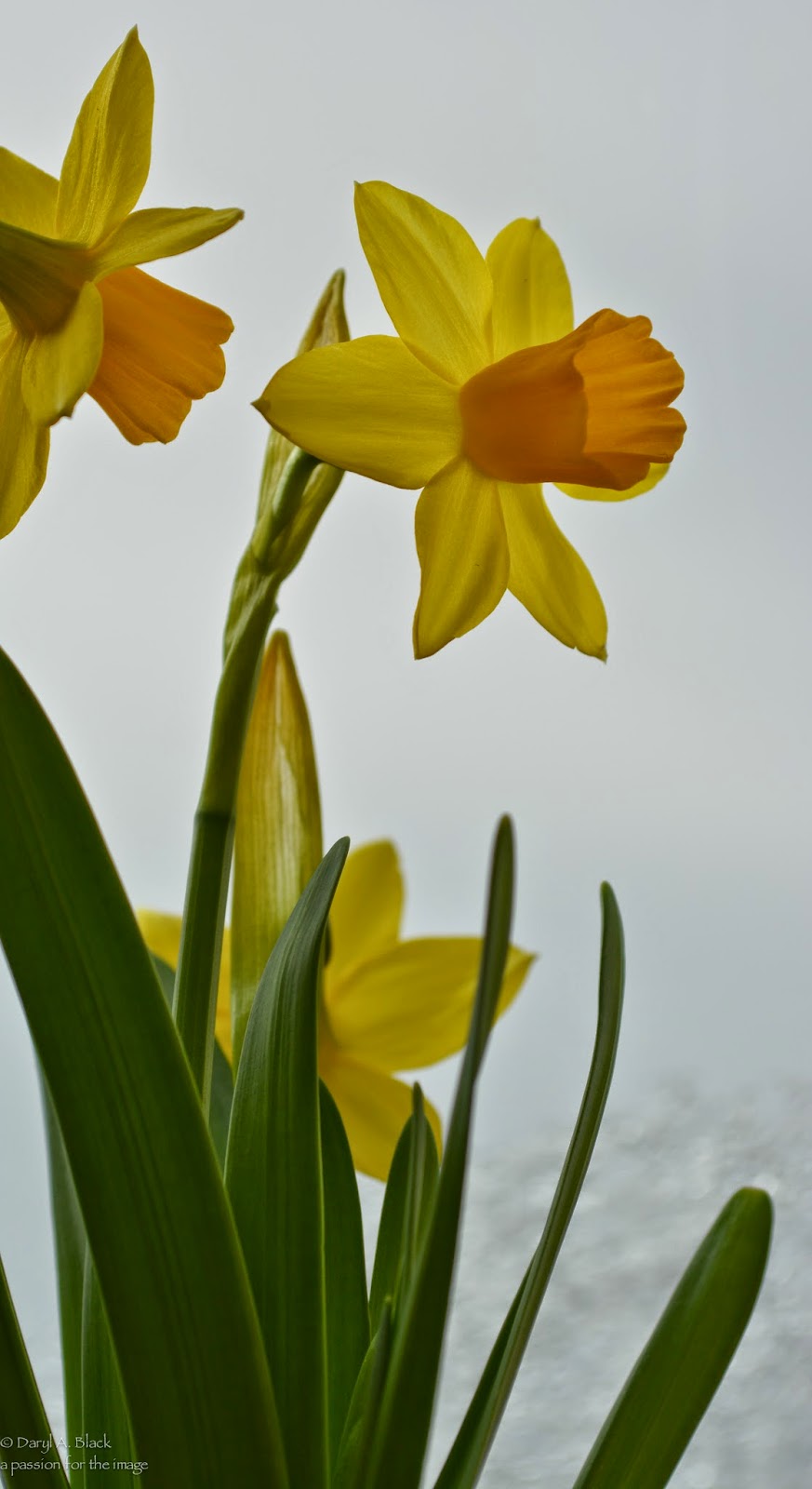 As a photographer, I have always appreciated even overcast for shooting environmental portraits, but that same sky is also excellent for flower closeups, providing a most interesting backdrop. 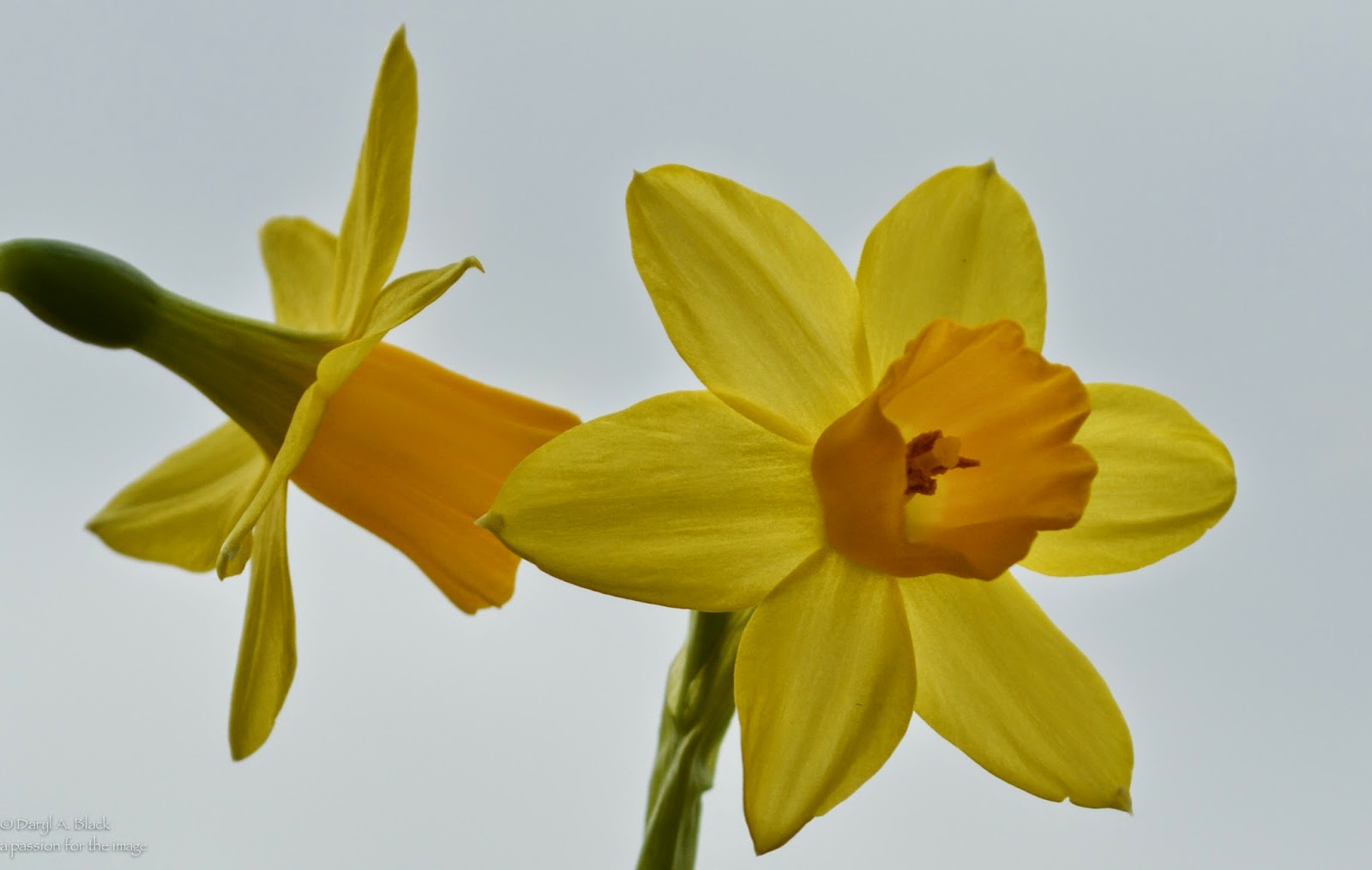 Thanks to Ingrid and Robert for these lovely spring surprises!

To many, spring begins with flowering bulbs and fruit trees bubbling with blossoms.  I have been known to photograph these things with an indescribable joy in my heart.  But as is typical in northern New Mexico, more often than not, the fruit trees bloom, and just when they are poised for the first stages of fruit production, a late frost lays over the land, dashing the hopes of fruit ranchers and enthusiastic foodies alike.

But besides flowers and taxes, a sure sign of spring is really interesting weather, and we in United States, have certainly had our share this week.  For weather geeks, the thin and powerful whips of thunderstorm lines reaching from southern Mexico almost to the Canadian border, is definitely a signal that spring is here in earnest.  The radar-indicated colors range from green and yellow, to orange, bright red, and even magenta.  One must hope that most people under the magenta pools are in their basements or safe rooms because there is a powerful brew in the sky ready to stir the pot.  Although not as dramatic as some we have seen in other locales, these cumulonimbus mammatus or "mama" clouds graced us with their drama, but fortunately not a violent result. 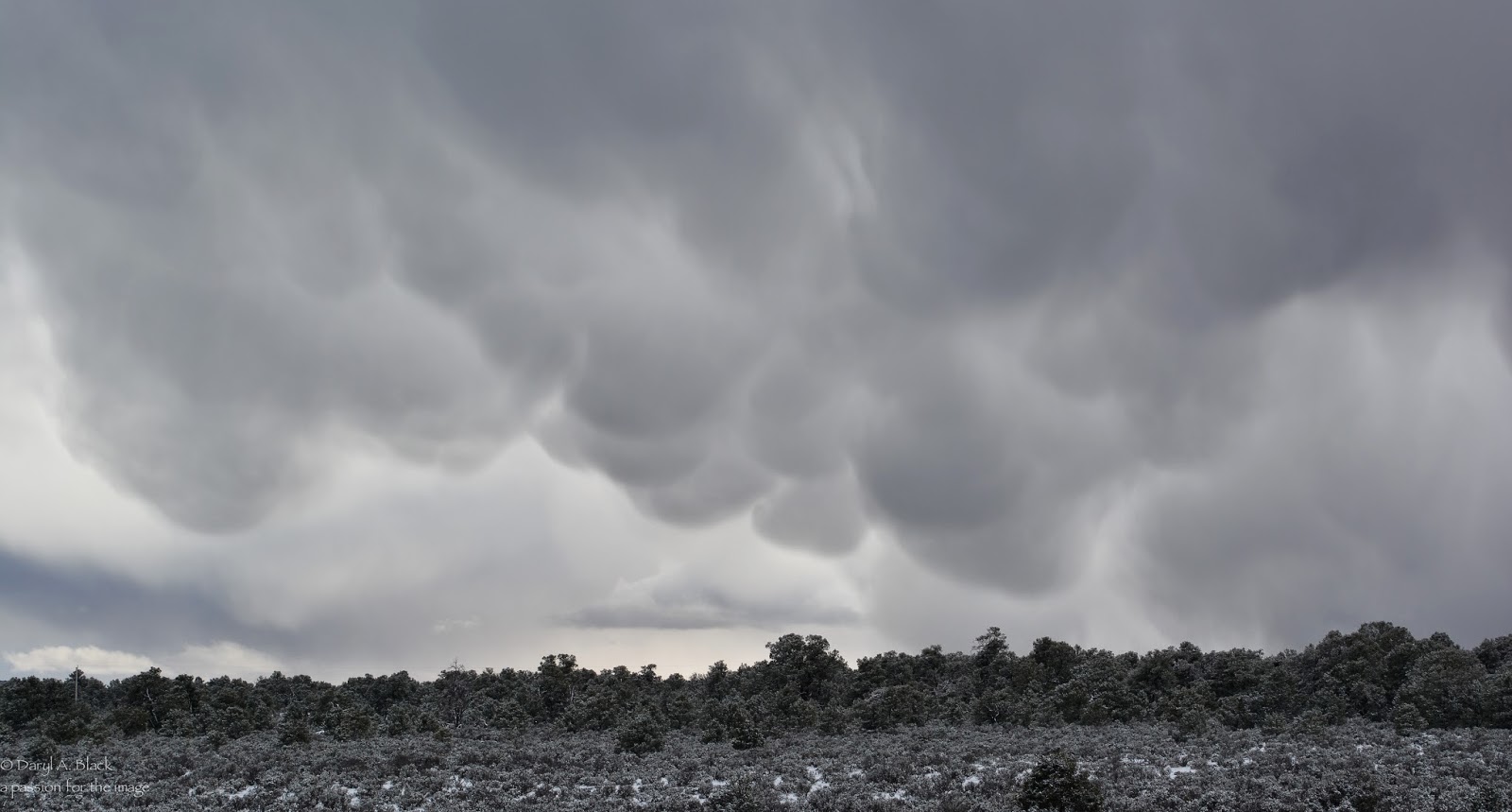 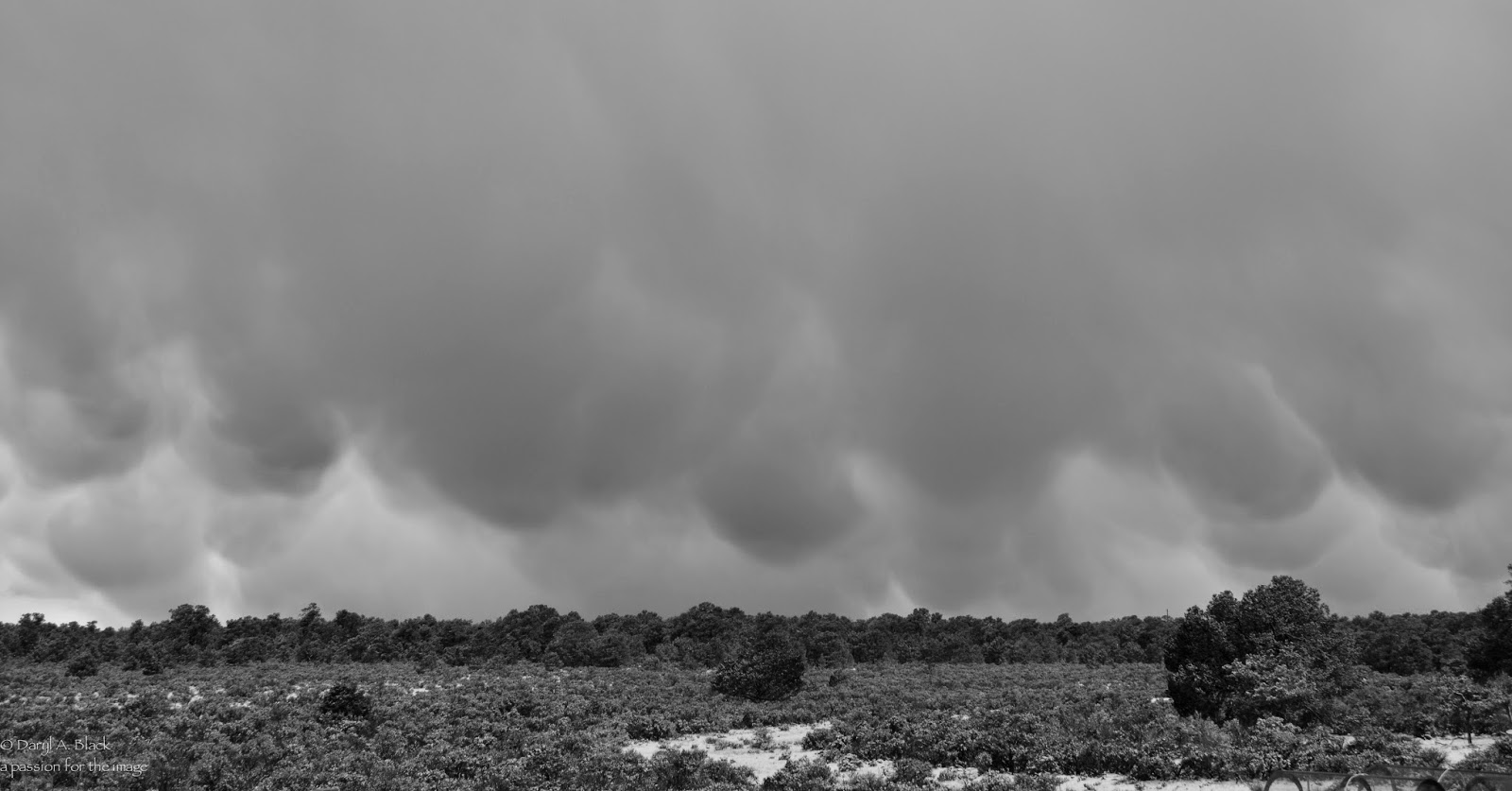 I love the understated caution included in the Wikipedia description of these types of cloud formations.

"Due to the intensely sheared environment in which mammatus form, aviators are strongly cautioned to avoid cumulonimbus with mammatus."  Keep safe!